I bet that you’ve never had oysters for brunch before. I’m also pretty sure that you don’t think a restaurant near The Austin Convention Center can be different from the many other chains that dot hotel-filled areas.
If the answer is yes to either of those questions, chances are that you haven’t been to Micheladas yet.

The brunch menu is pretty standard for a Texan: migas, biscuits, breakfast tacos, chilaquiles, and more! We were excited to explore the full menu in addition to the brunch specialties. Who knew that you could find Riptide oysters on a downtown menu? Usually, it’s pretty much a guarantee that you’re going to get stuck with Gulf oysters (not that it’s necessarily a bad thing) anytime you’re craving the shelled stuff at other local restaurants.
My partner, the ultra-carnivore, chose the Dom Estable. It was a filling dish of steak fajita enchiladas, rice, and borracho beans. He claims that he downed a ridiculous amount of mimosas to combat the spiciness of his dish, but I think the fact that mimosas were only $2 each was the real reason. Did I mention that they squeeze their own juice daily? The juice makes a huge difference in mimosas, and the prices on bloodies and beer made great alternatives for when I needed to try something else. We explored the frozen margaritas, which are only $3 during their happy hour, and they were tart!
Apart from their sunlit, spacious dining rooms, Micheladas has both a street-level and rooftop patio. Not only does it make it a perfect spot for a large group, you can also bring your four-legged friends along.
The bottom line: I just had a healthy, delicious shrimp taco with copious amounts of salsa. I am full. I am happy, and I had enough mimosas to work up a nice afternoon buzz. If you like Tex-Mex, then you’ll love Micheladas.
January 13, 2013 1

Russel’s Bistro is nestled just shy of 38th Street, near the original Kerbey Lane Cafe. We were on our way to Kerbey, but the massive line (and rather annoying drum circle at the shop next door) made us stop to see just what Russell’s had to offer.
When I learned that they give you complimentary mimosas and coffee while you wait for a seat, my mind was made up.
The menu was overwhelmingly focused on eggs, but that’s pretty standard for most brunch spots. The mimosas, cheaper than the advertised price if you don’t spring for the Prima Perla Prosecco, were lukewarm and dismal. The wait between each one on their otherwise enjoyable patio became unbearable. At one point I had to leave my seat to seek service.
Dishes run from $9 all the way up to $17. The crab cake benedict was disappointing. The potatoes were fine, the poached eggs were good, but the crab cake was all cake and no crab.

My partner enjoyed the complimentary fruit served with our meal, and even the coffee. We thought the ambiance, particularly the patio, was pleasant, but I don’t think the food dazzled us. If they upped their game on the mimosas (such as serving them cold and fizzy), and if service had been even a little attentive… I’d have loved it.
November 18, 2012 0 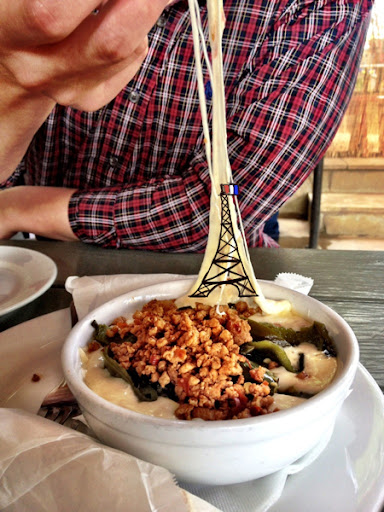 I know it’s not French, but my partner’s queso fundido  seemed to stretch in the shape of The Eiffel Tower. Did I mention we recently had brunch at Takoba? 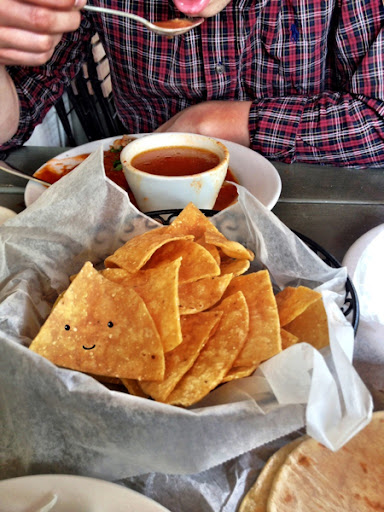 Mimosas were $1.50 per glass, and $7 for a pitcher. I saw extra large micheladas for $6, bloody marys for $5, and a string of people stuck with a 20 minute wait to get tables.

It didn’t bother us, we just killed time at the bar. 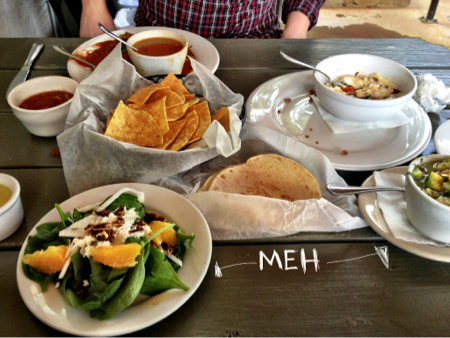 This wasn’t my first time at Takoba. I previously had the ceviche, and was promptly reminded by my partner that I hated it. I figured I’d give it a second chance, perhaps I was just in a bad mood last time around?
Nope. Still hated it. I can’t quite place why, but it’s not my favorite. The salad was small, but decent for the price. 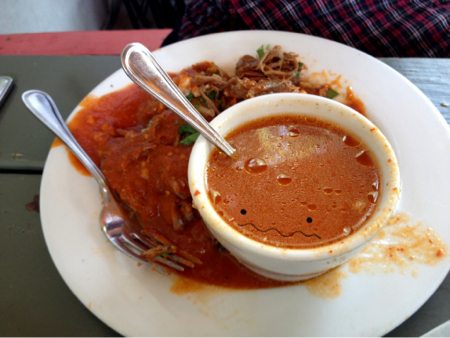 A lot of the brunch menu focused on eggs, but clearly we preferred exploring the other items.  My partner chose the menudo, which he always gets, and loved it.
The takeaway? Brunch has cheap mimosas (win!), menudo (carnivorous people’s win!), and less than stellar healthy options (not so much win?). I’d gladly go back, sit on the patio, and enjoy the fall weather with a pitcher or two, while my partner, in his love for their soup, had a bowl or three.
By the way, we could’ve stopped at the queso fundido. That dish was filling!
September 30, 2012 0 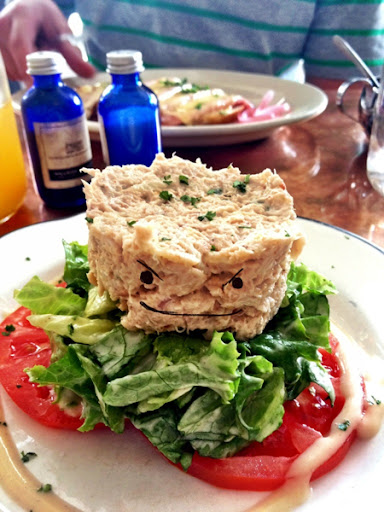 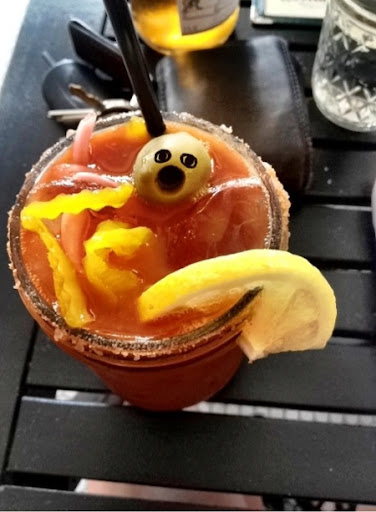 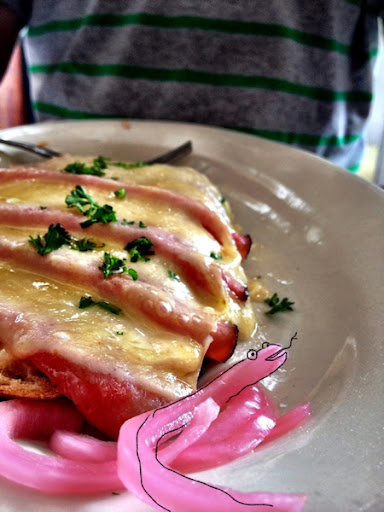 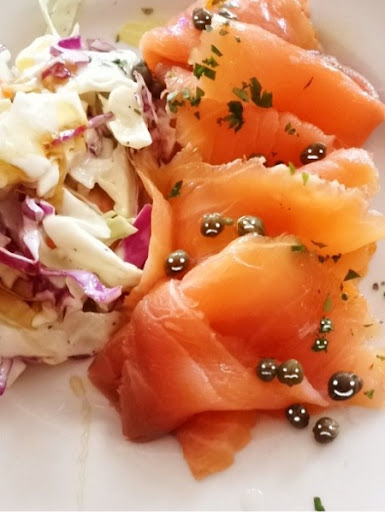 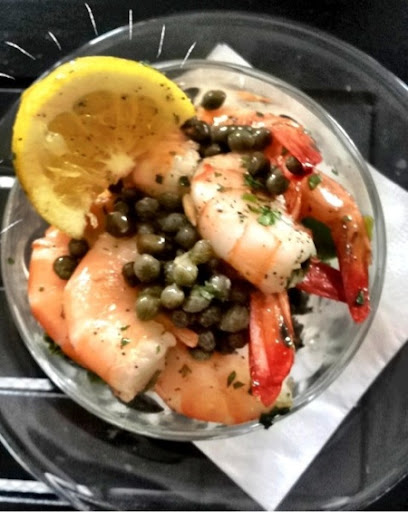 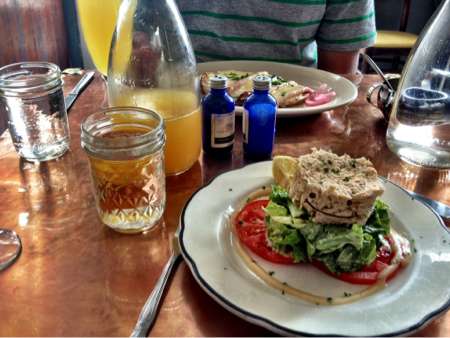 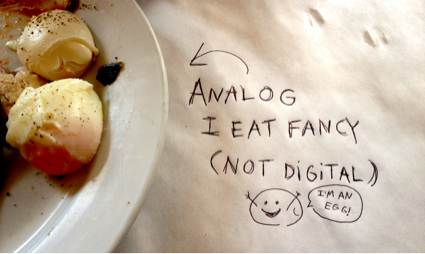 Sagra is best known for their half-off pizza happy hour (5-6:30), but we decided to stop in for Sunday brunch. I think it’s safe to say that it’s now one of my partner’s favorite brunch spots in town. 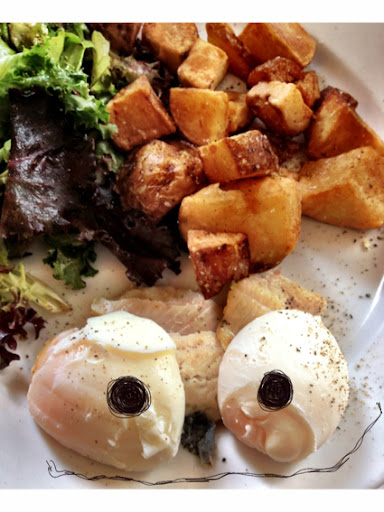 They started us off with a massive basket of delicious breads. In search of slightly healthy fare, I decided to order smoked fish (shown above). 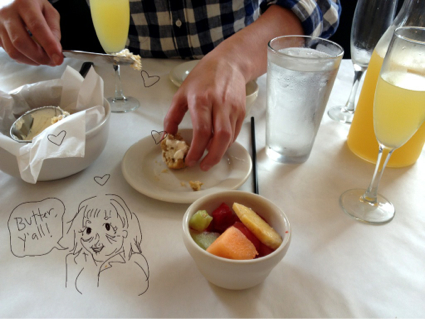 Most of the menu was egg-centric, but some truly Italian dishes were also offered. Wood-fired pizza for breakfast? They have it. 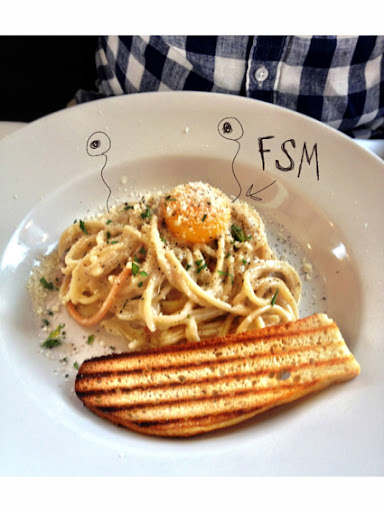 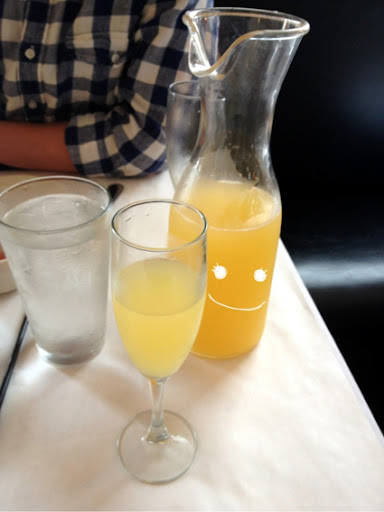 The biggest draw to Sagra for brunch would have to be the $1 mimosas and bellinis.
If you’re looking for a nice meal in a cozy house off the beaten path of downtown Austin, go to Sagra.
August 1, 2012 0 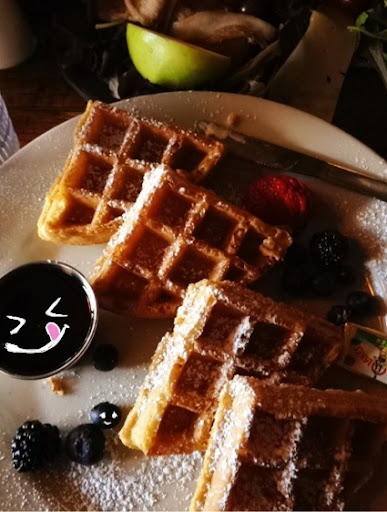 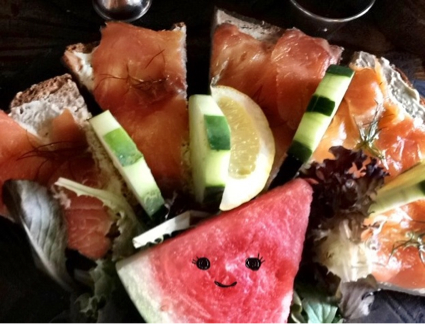 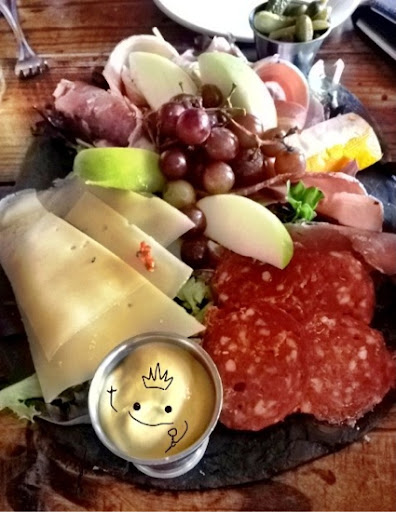 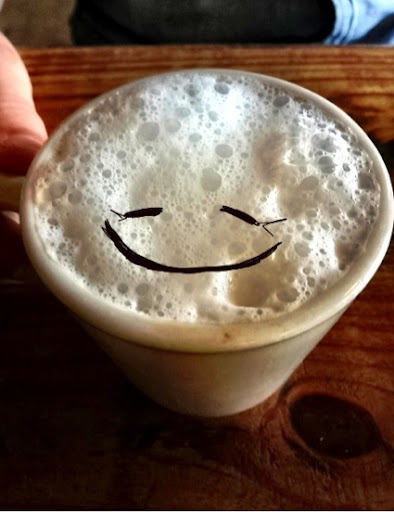